Container ship MOL COMFORT broke in two and sank in Arabian sea on June 17 2013, about 430nm southeast of Salalah, further details unknown. The 26 crew were rescued, but the ship and it’s cargo were declared a total loss. Vessel was en route from Far East to Northern Europe. Vessel was engaged on North Europe Express 1 Service, Far East – Northern Europe.

Next port of call was Jeddah, where the vessel was to arrive within the next 3 or 4 days.

First information indicate that the crew could abandon the ship with lifeboats and were assisted by the YANTIAN EXPRESS that moved nearby. 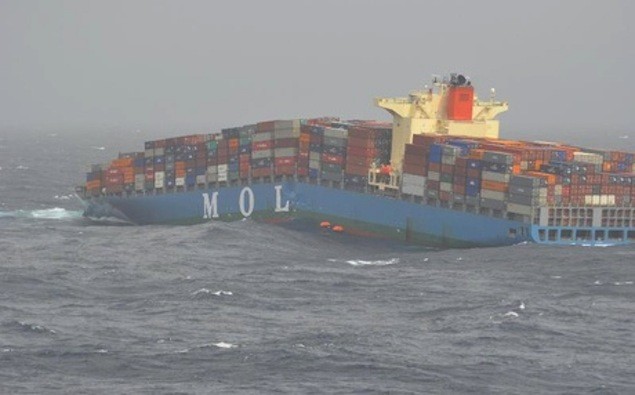 Indian Coast Guard confirmed the sinking of MOL Comfort. Vessel broke in two and sank some 840 nautical miles west of Mumbai, three vessels – MV Hanjin Beijing, MV Zim India and MV YANTIAN EXPRESS, took part in rescue operation. Weather in the area is rough, with sea up to 6 meters. Reportedly, there were some 4,500 containers on board, sea in the area is scattered with drifting containers. 26 crew consisted of 14 Filipino and 12 Russian seamen. m/v YANTIAN EXPRESS was actually the vessel which rescued the crew from two life rafts and a lifeboat.

MOL COMFORT broke in two and sank in Arabian sea

Next port of call was Jeddah, where the vessel was to arrive within the next 3 or 4 days.

A crack in a hull developed due to presumably, sailing in rough seas, with resulting water ingress in one of the holds in midsection area. Emergency was reported at around 0700 LT. 26 crew was rescued by nearby vessels. News are still confused, some sources say vessel sank, some say it may be still afloat, but most probably, vessel sank.

Indian Coastguard confirms that sections of the MOL COMFORT are still afloat and being monitored. Prior reports indicated that vessel sunk, this seems not the case.

Analysts agree that something like this should not happen. Vessels are built to resist much more adverse conditions at sea. “New ships just don’t break apart at sea.”

This incident will certainly be reason for concern to the shipbulding industry, but also insurers and classification societies, as it shatters the pillars of their profession. It may be expected that the incident will be examined extremely thoroughly.

The incident location is far off the coasts, hence out of reach of terrestrial AIS receivers. Hence, exact indication of the position has as of yet not been published and reports were contradictory.

In the following map, FleetMon shows the track and position of the MOL COMFORT on its way from Singapore westwards, takingn route to Yemen coast and the Gulf of Aden. Apparently the incident took place on 2013-06-17 06:00 UTC and the vessel is drifting with AIS transponder still working. The track has been created using satellite AIS data kindly provided by our partner LuxSpace.

Detail view shows the vessel – to be more exact: the section bearing the AIS transponder – drifting away at about 2kn to 5kn in strong winds. Within 24 hours, the section drifted some 57 nm.